In 2010, the project group “History of Nazi Germany, Institutions, Human Rights” was set up at the Neuengamme Concentration Camp Memorial in order to develop educational modules for people who work for public institutions. These modules aim to bring together approaches from both historical/civic and human rights education. The seminars and courses deal with the role of the police, public administration, the judiciary and the armed forces under the Nazis and in post-war Germany and also touch on human rights issues in the context of public sector work. They are aimed at trainees and employees of public sector institutions as well as members of the general public and educational staff from schools and other educational institutions. The courses try to encourage attendants to ask questions about the relationship between the behaviour of public sector institutions in Nazi Germany and current social challenges or human rights issues.

Nine course modules on public administration, the police and the judiciary were published in 2013 in order to put them at the disposal of memorial staff and other people working in the education sector. The project group developed further modules on the judiciary, the armed forces and the police in the past and present. In addition, the group offers further training courses which give an introduction to the project’s subject and methodology.

You can find further information on the project’s background and topics, ways to establish connections between the past and the present, experiences with teaching our modules and on the people involved as well as our collaborators here. 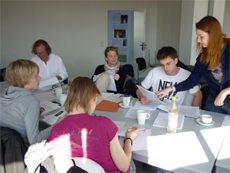 A group of seminar participants at the Neuengamme Memorial’s Centre for Historical Studies, April 2010.
Photograph by Ulrike Pastoor 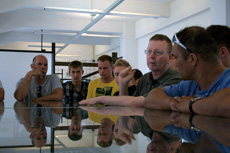 A group of seminar participants visiting the Neuengamme Memorial’s main exhibition,
May 2012. Photograph by Ulrike Pastoor